Time to create my character for the Solo RPG game I am going to play. As I had mentioned previously, I will be using Freebooters on the Frontier 2nd edition as my RPG system. The rules for character creation state that I can either choose or roll my options and stats... I will be rolling all of my options because yolo.

My first roll is to determine my toon’s character class (fighter, thief, cleric, or magic-user). Wouldn’t you know it... I rolled a 12! Magic-user it is. This should be exciting for a solo game because I am sure I’ll be dead fairly quickly due to the low HP and lack of starting armor. Joy!

The next roll is to determine my toon’s heritage or race (human, halfling, dwarf, or elf). My roll of 6 means my toon will be a human. The special move for humans is when you Wrap Up (the Freebooter end of session move), mark 1 additional XP. I also get to increase two different stats by 1 as a human.

Next, I get to roll for stats (strength, constitution, dexterity, intelligence, wisdom, charisma, and luck). I am just going to roll in order and take what I get in the order that I roll it. I rolled a 10 for strength, an 11 for constitution, 10 for dexterity, a big 8 for intelligence (wah wah), a 12 for wisdom, 9 for charisma, and a super sad 5 for luck. Luckily I get to swap one score for another and switch the two plus my heritage stat bonus... but these stats are pretty blah. Oh well. For my two stats that I want to swap, I am thinking I’ll swap intelligence for strength. I figure my toon will have to be at least a little more intelligent, being a magic-user, and I can always buy a donkey to carry my toon’s crap. For the heritage stat bonus, I will increase my toon’s constitution by 1 and intelligence by 1 as well. The extra constitution will help raise my toon’s HP and they can always use more intelligence. I also like that my toon’s luck roll is so low... that should be interesting.

The next roll is for my toon’s HP. The roll is the magic-user’s hit dice plus my toon’s constitution modifier (CON). My hit die for this character class is 1d4 and my CON happens to be 0... so this will be a straight roll. Luckily, I didn’t roll the worst roll and I hit a 3. So my toon’s total HP is going to be 3 and they can be one shot by pretty much everything that carries a weapon... oh boy.

Now it’s time to roll for alignment (evil, chaotic, neutral, lawful, good). That will figure out which alignment my toon gets and how many virtues and/or vices they get to take. With a roll of 1, my toon will get the evil alignment which also means they get 3 vices and no virtues. The alignment goal for an evil character is to inflict harm on another for personal gain. While we are at, I’ll roll 1d100 3 times and see what they get for vices on the lovely vice table. My toon is irritable, obsessive, self-pitying. Wow! This alignment and these vices might actually be pretty close to perfect for a solo game. I can spend my time efing with the npcs and getting myself into all sorts of fun shenanigans.

This next roll is my favorite one because it is to determine three different appearance traits and I can get and idea what my toon will look like. Let’s see what I get! My magic-user has gnarled-hands, discolored skin, and terrible posture. I mean, this person is looking like a stereotypical evil magic-user. I am going to guess their discolored skin happened because of a magic accident of sorts, like an explosion or drinking the wrong potion or something. Lastly, I need to figure out if my toon is male, female, or non binary. Since it’s based on the first roll I made for my appearance and I rolled on odd number, my magic-user is male.

With all of that out of the way, I now need to figure out what my toon’s starting spells are and what kind of gear they get. We’ll start with figuring out their first 2 spells. The first spell I roll is [Form] of [Adjective] [Element] and rolling 1d100 for each of those tables gets me the Storm of Many-Colored Ash. I’m going to have to figure out how to use that one because that’s a weird one... For my second spell, I roll for a [Adjective] [Element] and rolling 1d100 for those two gets me Prismatic Destiny. Again, this is a weird spell that I need to think about. Both spells have something to do with colors so at least there is a little bit of a theme going on there.
Finally, time to figure what gear my magic-user will start with. They automatically start with a spellbook to keep their spells, a shoulder bag, some rations, and a water skin. I get to roll for a few more things like my clothes and a basic weapon and a random item and such. For those random rolls, I ended up with shabby robes, a hood for a hat, and staff, a couple of random books, and a signet ring worth 20 SP (SP = silver pieces). Now the fun part about all of this starting equipment is since I have a low strength, I can only carry 3 weight of items... but I have about 5 weight of gear assigned to me. My toon can carry more than their maximum load, but no more than twice their maximum and all of my rolls are -1 till I offload some of this stuff. Spoiler alert, I’ll be dropping my shoulder bag a bunch until my toon can afford to hire a slave or donkey or something.

Nice! I am digging how low powered my toon is and I am stoked to see how horrible their death is going to be. Hell, if they live long enough, I might even draw a picture of my toon to see what they look like.

For my next post, I will complete the See The Frontier section of Freebooters so we can get our starting regional map. After that, I’ll know a little more about the world and I can come up with a little backstory for my toon. 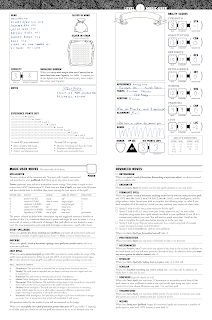 Posted by Darth Butternutz at 9:02 AM